Timeline of Our Theatre

The Ohmann Theatre was built in 1915 by Burt Ohmann in Lyons, New York. Burt operated the theatre through the 1930’s. His sons Robert and Myron took over the management of the theatre together through the following twenty years. Robert continued to run the theatre as the sole proprietor and theatre manager until the late 1980’s. In 2005 his oldest son Bob brought the theatre back to the Ohmann family with a complete reconstruction.

Through its long and proud history the Ohmann Theatre has been a live theatre house, the site of vaudeville and musical entertainment, and even a venue for amateur boxing. Of course, the movie screen was always there, lighting the faces of the finest actors and the most touching cinematic moments, from the earliest silent films through the talkie era and beyond.

Now back in the Ohmann family and renovated to modern standards but still with the old-fashioned charm and character of the original house, the lights are shining brightly at the Ohmann Theatre again. 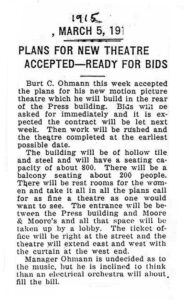 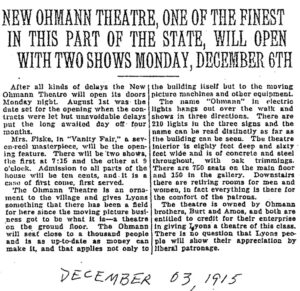 On July 19, 2006, Bob Ohmann was presented with the Theatre Historical Society Honorary Member of the Year Award, for his efforts in renovating and reopening his family’s historic theater. The 1,000-member theater society seeks to record and preserve the architectural, cultural and social history of American theaters. The group praised Ohmann for his efforts to bring the theater up to modern standards while retaining its old-fashioned charm. 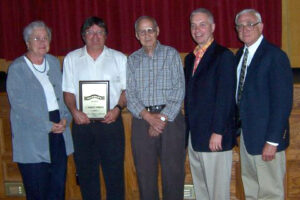 Approximately thirty-five people attended the presentation, including representatives from Lyons National Bank, employees of the Ohmann Theatre and from St. Lawrence Homes, the project manager from contractor Chrisanntha Construction, State Assemblyman Robert Oaks, the Mayor, Supervisor and several members of the Ohmann family. 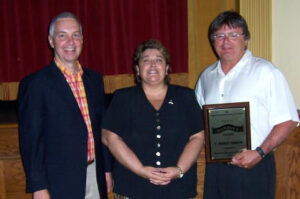 We are following all the NYS and CDC guidelines, including limits on seating. Masks are required for all attendees.